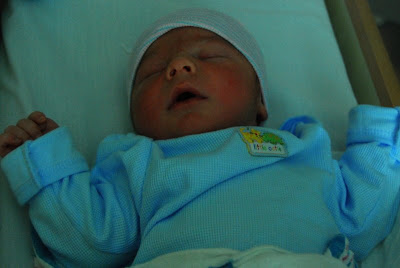 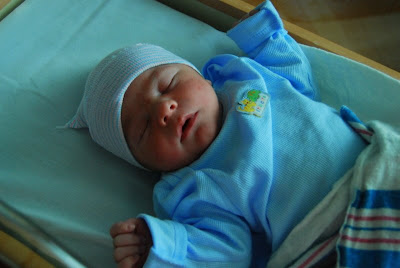 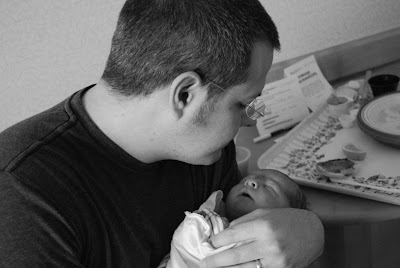 Aunt Brynne and her new nephew... 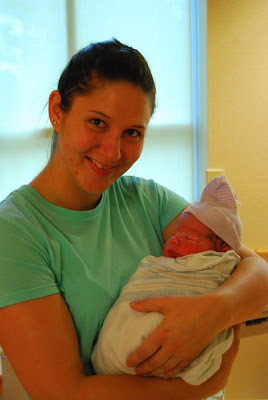 Mommy and her new little man... 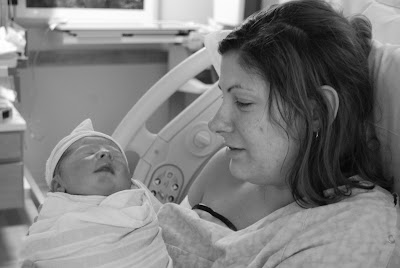 So ever since Tuesday night I had been feeling contractions, but they were really sporadic and inconsistent. Thursday morning at 2 a.m. I woke up because they started to get more intense, so I went downstairs to chat with Shaun and than I took a bath. They ranged from 8-12 minutes apart. I still wasn't sure that I was in labor at that point, but after my bath, I decided to pack my hospital bag...just in case. Once I was standing up and moving around, they started to come more frequently and intense. At about 4:45, I called Brynne (super sister AND super aunt!) to come over and than when A woke up, they could come to the hospital. I woke up Shaun and told him...yeah I am definitely in labor. The contractions were really really intense and about 3-4 minutes apart. I was going to try and attempt this with no pain medication, but at that point I told him I didn't think I could do it without drugs. Then I threw up (sorry, I know that's gross!), and I remembered that happens in transition and when I was almost ready to push with A, I kept throwing up, so I told Shaun, we need to go now to the hospital. I called Brynne back and told her I couldn't wait, and we would bring A with us, so just meet us at the hospital. We arrived at the hospital at about 5:45 a.m. and the nurse wanted me to leave a urine sample and change into the gown. I could barely get the gown on b/c the next contractions were soooo unbearable. She checked me and ran out of the room saying they were getting me in a room ASAP. At that point I really felt the urge to push, which I yelled as she was running out, and then about 5 nurses ran in and were telling me not to and frantically getting everything ready. Brynne arrived and took Aislynn out in the waiting room (poor honey was a little freaked out by crazy Mommy!). They got me in another room and I kept feeling the need to push soooo bad, the doctor arrived and broke my water and told me on the next contraction I could push. Maybe 3-4 pushes and he was out at 6:16 a.m!! He came out SO mad too! He wouldn't stop crying, lol!
Everything happened so fast!!! I am glad we didn't wait for Brynne to get to our house, other wise we would have barely made it to the hospital! It was very surreal, and with Aislynn I had an epidural, so I had no idea what the contractions would be like towards the end. Anyways, so glad he is here and healthy and that I am no longer pregnant, lol! He is a good little nurser and sleeper, and I am still trying to get used to pee coming out of something every time his diaper gets opened, lol.
Aislynn is a little scared...she doesn't want to hold him or barely touch him. I think his crying made her scared and I scared her too when I was in labor:( I had the i.v. and a bunch of boo-boos on my arm from where they tried to get the i.v in me and she was really concerned about that. She does love him already though...when I was taking a shower this morning, I heard her tell Shaun, "I love you, Dad," and then she said, "I love baby brother too." Kieran started sucking on his hand and Shaun told her he was hungry and she said, "Are you going to feed him with your chest?" and He told her no, that only girls could do that, and then she offered to feed him with her chest, lol. Then he explained that:)
That is all for now...lunch got here and then I am going to sneak in some sleep hopefully:) We get to come home tomorrow morning, really looking forward to that!

Congratulations!!! What a beautiful baby boy. I'm so proud of you and Shaun.

YAY! He is absolutely PRECIOUS! With all of the drama, I hope you are able to settle in and enjoy Kieran. May A get more comfortable with him and want to hold him too!

Hugs to you all!

Awwwww... Congrats to both of you! Can't wait to meet the little guy. Best wishes!

He is adorable! I'm one proud uncle this week and couldn't he happier for you and Shaun.

That was quite the story. It sounds like it was a good thing you made it to the hospital when you did. It also sounds like Aislynn is adjusting but I think she'll keeping warming up and be her usual cute self.

You've really shown me up now that you've blogged from the hospital. That's some dedication!

Oh PAM!!!! I am sending you huge cyber hugs!!! He is soooo sweet!!! You labor story is the same labor story I have with Laney! That fast labor is a little scary! You did it though girl! I am so happy for you! Congrats again!!!

Love the pics! We knew he would be a looker, though! So glad A is adjusting well. Hope it keeps up! Best wishes!

Wow that was close, Pam. Sure glad you made it to the hospital in time! Sounds like your delivery was quick, if not painless.

Kieran is so sweet... I love the way Shaun is holding him, you can see what a wonderful dad he is.

Hugs to you all and congrats again!

CONGRATULATIONS!!! A healthy, beautiful baby boy! Kieran is so precious! What a sweet, cute little face. I love your birth story and hearing about A. I am so happy for you. You must be exhausted. Big hug to you!

I love my new nephew tons and I had a blast watching Aislynn yesterday, she was sooooooo good. I'm glad I got to be there for you. Love ya lots, congrats, I'm so proud of yall.

Wow, what a story!!! He's adorable and i can't wait to meet him! Hope you all are doing well. I told Riley that you had the baby and showed her the pictures. She said when i get big i am going to have a big tummy and have a baby-which she said was tomorrow. Eric and i made her repeat that she had to be 25 and married and her husband had to have a job!!

So I had to track down the story once I got your message that he had arrived! That is quite a story! So happy it went so smoothly! Welcome to the world little man! He is gorgeous!