I guess posting and taking pictures everyday for a week straight made me lazy;) I don't have much to share...but this is what I have been doing A LOT: 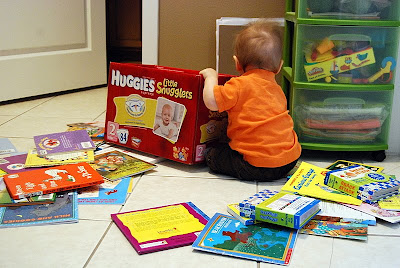 Cleaning up after this guy. Seems his favorite new activity is pulling things out of their container...books, toys, clothes, laundry, etc. What's funny is that I have VERY similar pictures of Aislynn at this age. Aislynn wasn't too happy with this new thing of Kieran's but after I showed her the pictures of her, she was cool:) 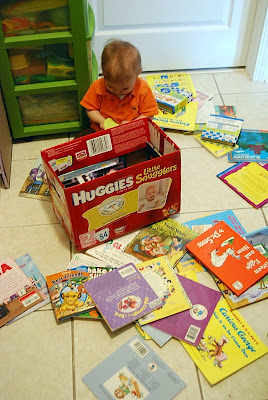 Aislynn was playing with play-dough earlier today and this is what she made: 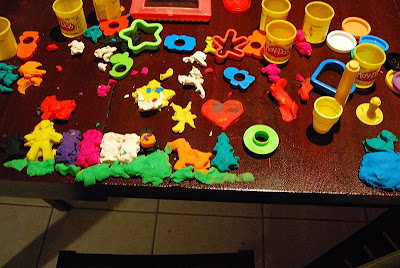 She made a family-on the bottom left (from left to right: Kieran, Shaun, me, Aunt Brynne, her, Lillian, and her other brother??). I love that she put the green under us for grass and put a horse and a tree, then on the bottom right, she added a pond with a duck. She also added a star (with a face!), a sun, a butterfly flying above us, and a heart, "because we all love each other." She is so creative:)

Other randomness...yesterday we were playing in Kieran's room and he was playing with this duck and Aislynn and I kept telling his it was a duck and that ducks say "quack quack." Just out of nowhere he said "du ca ca." I love that he is starting to try to copy us so much!!!

He also is giving us kisses...just pressing his slobbery little mouth against ours. He kept giving Aislynn kisses and I said "awwww" after each smooch. Then he started saying it, so he would giver her a kiss then say "aaaaaaaaa." It was soooooooo cute!

So that's about it for now, I have lots of scrappiness (including my WITL album!) to share as soon as I get some images...

i am really loving these little moments - and am increasingly missing them SOOOOO much lately. BIG KIDS are a tough road - wanting to explore beyond what I am ready to handle!! Keep them little!!!

Those slobbery kisses are the best, aren't they?

I can totally relate to the baby mess...it seems that's my life lately!

I love that A included me in her family play-doh pic, soooo sweet. I can't believe that K is going to be 1 soon it seems like just the other day that you called me in the middle of the night saying I think this is it, ha! You have 2 beautiful amazing kids and I adore them.

I am so far behind again. A's museum paintings are great and thought it was cool she wants to be a "Museum" painter when she grows up.

I really loved the "Week in a Life" series.

The swiming pool photos are great. It looked like they had a great time.
The blog won't let me type anymore!!