Over on my craft blog, I am doing a little daily mini-album on what we are thankful for. I am hoping to get random shots to accompany the words and this was from yesterday: 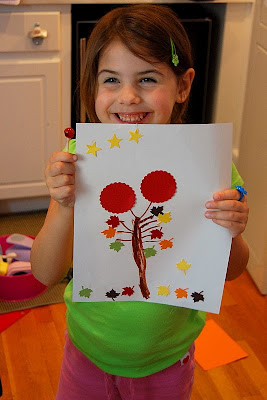 Killed 2 birds with this one...A was thankful for Halloween candy (notice the sucker) and I was thankful for the pictures she makes for me. She likes to use my scrapbooking punches and scraps of cardstock to make collages and other pictures. This one was a fall tree:) 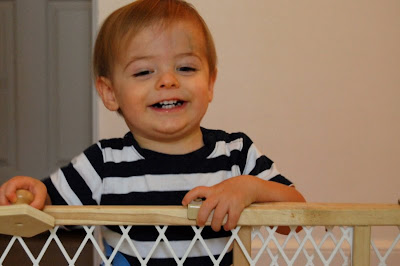 For today, I was going to write I was thankful for this guy...who runs up to the gate while I am in the kitchen and says "mmmmwah" and wants me to come over and give him a kiss. But (while I am so so very thankful for him) I am thankful for Shaun who put together my comfy computer chair I am sitting in right now, for taking out the trash (always) and for bathing both kiddos tonight:) *** I never posted pictures from A's Halloween party at school, which there are few. My camera was acting very crazy and uncooperative, plus I was wearing K in the Ergo and he kept grabbing the camera:) Here is A and her trick-or-treating partner and friend at school, Lilly. She is such a cute little girl and Aislynn is so much taller than her, lol! 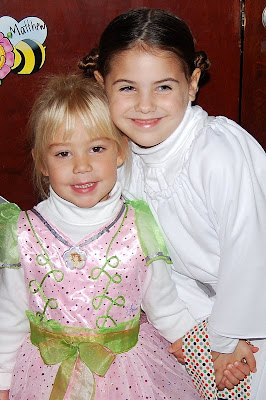 Here is her class: 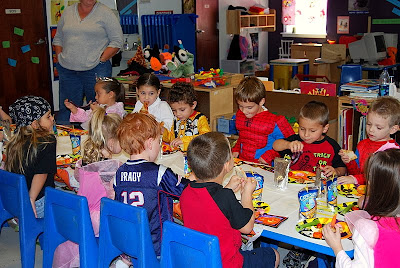 The little boy in the Spiderman costume is Matthew, who we carpool with. When we were driving to school, Aislynn told him that it was cool that his costume had muscles and that she liked them, hee hee:) Oh, and in circle time, Kieran sat in the circle with all the big kids and they just looooooved him:) He loved it too, all those big kids gushing over him and trying to make him laugh:) A was the proud big sister, telling them all about her baby brother:) *** Saturday was such a nice day. The weather was gorgeous and we spent the morning at the Farmer's Market, came home, and both kids took a nap. Shaun was out of town, so I told Aislynn if she took a nap that we could have a pajama party. So after K was in bed, we played games, watched Sleeping Beauty and had popcorn and colored. It was fun and she loved it:) She kept telling me how much fun pajama parties were:) Anyways, in the afternoon we had a dance party and here are the out-of-focus, blurry pics that I love:) 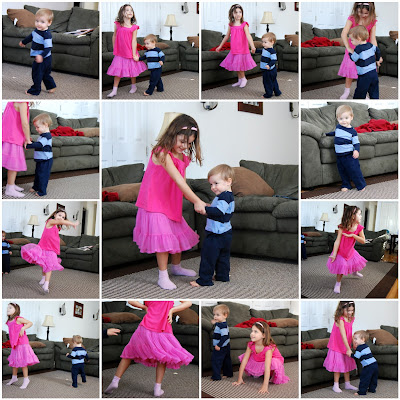 November is such a great month to do this project--I'll have to think of doing a blog with the theme during the week of thanksgiving (because I can't handle much more than that now with report cards due at school and homework monsters invading this house!)

Dance party looked fun! I love collages NOW! I think I might have fell in love with a new addiction - tell A het skirt was perfect for a dance party!

That is so cool that the pre-school teachers let K sit in the circle at circle time! I can just picture it and I bet it was so sweet!!!

Love your collage! Aren't they fun? They have really saved me so much time!

I love her costume and it looks like they had fun at the Halloween party! I am thankful for my beautiful niece and nephew and sis, hee hee.