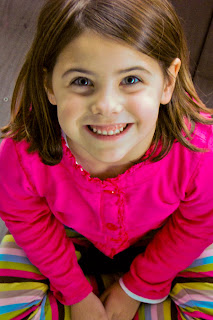 is a smarty pants. She is constantly making me smile with what she says. Over the break, we were playing lots of Christmas music. We were listening to Silent Night sung by Julie Andrews and Aislynn told us that this sounded like Mary Poppins. She did this another time when she heard a song sung by Angela Lansbury and she said it sounded like Mrs. Potts (from Beauty and the Beast). She also picks up on subtle things. When we were at Disney...we were taking a little break eating a snack. Aislynn wanted to get more treats but we told her we would later. She said "yeah, you don't want to eat too many goodies because you might get F A T." She spelled out fat because on the bench next to us there was a quite large person...and she knows you spell words when you don't want someone listening to know what you are saying. Of course, we were embarrassed (I don't even know if the person heard or not), but I thought it was clever nonetheless. She describes things so cute too...when we were at dinner the other night at a Chinese restaurant, she wanted to know if they were going to bring us some twisty chips, and she was talking about fortune cookies. She also wanted to know if Mulan lived in Chinese and if she eats rice, ha ha:) I suppose she will pick up political correctness over time;) Another time she was describing to Matthew (the boy we carpool with) what a light saber was and she told him it looked like a long, lighted up Popsicle:) 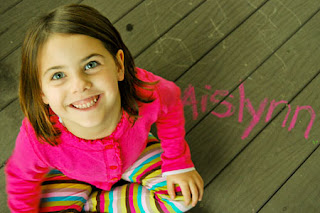 One of the sweetest things I ever heard her say was when Matthew was telling her about his big sister and she said "well, Kieran is my little brother and I have him in my heart."
And you sweet pea...are in our hearts always.

Oh! That is soooo adorable! I love reading the cute things little ones say!

She is such a sweet girl like on Xmas when I was leaving and she said Aunt Brynne, I wish you could just live with us! She is so smart too!

What great overheadshots!! The colors are fabulous with her stripped leggings and dark pink top!! I am in love with her smile too! Miss smartypants has won me over!

the pictures are awsome. and they are a handful at this age :)